Currently there is no way to define a  node as an input or an output.

So when running Xcheck, you get errors from unconnected components - for example if an input (or output) only goes to a resistor, Xcheck will report an error, that only end of the resistor has been used.

Check has included a custom component called "No Connect" - the problem is that all your inputs and outputs will be tagged with the same netlist node if you use this; and an input might go to to multiple circuit locations so it has a significant limitation there, as not really a "no-connect" node in that instance.

I use the 'Ports' feature to tag my inputs and outputs but this is not truly a "connection", just a node identification.

So not only does X-check NOT see this as a connection termination point, it also reports an error as a 'single-use only' of a Port (which could also be used as-intended to be a COMMON connection node);

A simple amendment would be to have a similar option to Ports, but have it be an input or output (it doesn't even need the differentiation for input vs output, just that it is an external connection)

So exactly the same way you would use a Port, with an editable label to call it what you want, but be designated a component effectively, that only has a single end termination.

Alternative to a new set of symbols completely for inputs/outputs would be just to have an option selection in the Symbol Properties for the Port to call it single-end termination. 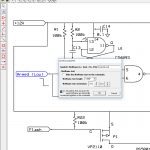 The problem is that all your inputs and outputs will be tagged with the same netlist node, free online geometry dash.

Board Stiff
3 years ago

Inputs and Outputs on PCBs generally terminate at a connector or test point. Connectors are modeled in ExpressSCH and saved as components. Terminations at connectors don't produce errors in xCheck.

Such smart work and reporting! Carry on the excellent works guys I have incorporated you guys to my tic tac toe online with friends . I think it will improve the value of my pcb.